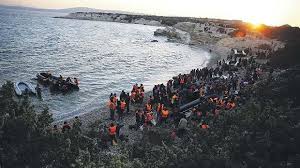 (Exerpt from the book “In Human Desert”)

The general inertial genealogy is much stronger than the education that is given to man in the universities of the West and in Europe. Very rarely there are exceptions. We are not racists, but if we have a great personality from Iran, that is our brother. Let it be. A mathematician who immigrated from Iran warned that we should be vigilant and attentive. Islam they know better.

The most ardent adherents of Western civilization are people who fled from backward societies. They already know that this is not by hearsay. There are no more ardent anti-communists than those who fled from communism. This Popper and Hayek from Austria, and Ayn Rand fled from Bolshevik Russia. Mannerheim, who dealt directly with the Bolsheviks and the Civil War, knew this very well. They knew it better.

And only a small number of exceptional people can accept the West. For this, the West must again realize its mission in the world – to develop self-knowledge and awareness of its civilization. Then it is easier to recognize and accept those who from backward societies can perceive a complex Western civilization, unlike any other type of society.

When these faithful adherents can condemn and shoot, if necessary, their former tribesman-terrorist, then this is our own personality. When Ukraine launched the war in 2014 with Russia, the question was, what can a Ukrainian shoot at a Russian who will attack? It turned out to be very difficult. It is difficult to shoot at people who speak the same language and live for a long time within the borders of one state. The fact that the majority in Ukraine speak and think in Russian. Although the civilizations are different. The nation must move to the Ukrainian language, wants or does not want, but one must be Ukrainian. And you need to learn everywhere foreign languages, but not Russian. As far as possible, we should withdraw from the Russian language as the language of an aggressive backward state.

You cannot change a person by simply teaching something. Some professions, even postulating the rules of conduct, if they are in a backward environment. What is stronger, as a rule, than what is taught in modern society. A person can easily combine Ohm’s law, physics, higher-level mathematics and even philosophy, which he will teach to pass the exam, but what his environment teaches will be stronger. Therefore, the most dangerous are not extremists, but a law-abiding environment, which in the form of an enclave exists in Western society.

Extremists and terrorists are just the tip of the iceberg. Therefore, here the antidote is assimilation. The liquefaction of these enclaves and forced assimilation. No, they are pushed back to their home countries. Because these cultural codes are irreconcilable.

We can give an example of the Roman Empire. They civilized the outskirts, but the outskirts diluted the Roman center. In South America, the Spaniards wanted to convert the Indians into Christianity. Turned. They began to pray. I even learned to read and write. But the Spaniards themselves under the name of Creoles fell behind. Mainland Spain continued its development. This applies to Portuguese-speaking Brazil. Europeans mixed and accepted the rules of the game of indigenous peoples. As a rule, this always happens.

In addition, Rusich mixed with the Polovtsy and the steppe. This Russia has slowed down its development. This is confirmed by the latest research of “The Lay of Igor’s Host” by Olzhas Suleimenov. He is Kazakh, and the Polovian language and Kazakh are similar. This interaction with the steppe raised them to some extent, but Russia is behind.

Ukrainian Cossacks are a repetition of the cultural code of the steppe people. Zaporizhzhya Sich – the same steppe camp. Many are offended by the words that the Cossacks are a pirate or nomadic camp. They did not make a city on Khortitsa for 3 centuries. There were enough stones, there was enough wood, the island is like a natural fortress. Build, and there will be an impregnable city. And they did not grow up to the city. Those noblemen who got there, the nobles themselves proletarianized, lumpenized. They did not raise the civilizational level of the inhabitants, but they themselves fell. There it was degradation.

Yes, there was literacy, but there was no decent education. In fact, there is a protoculture, a proto-state, a proto-consciousness. Because the influence of steppe people. Kievan Rus was on the border with the steppe and suffered from such a neighborhood.