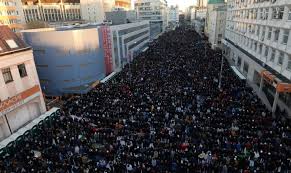 This issue, devoted to the reverse influence of the “Third World” on the civilization of “Golden Billion” is the most interesting issue in contemporary history. We mean the lacks and defects of the Western rebuff against the challenges of the more backward civilizations with their socio-cultural advantages during this actual clash of so different social and cultural systems on the same territories.

We mean also the stubborn intrusion of the flows of migrants without the intentions to adapt to the society into which they try to penetrate. They cannot (and do not want) enter into contractual relations inside the Western society and tend to seek to impose their own values and rules. The European society should drastically reject their attempts to override the useful mode of life in favor of Muslim civilization that was built during long term-time. We understand that these migrants unconsciously   seek to undermine the European life by the way of the rules of life in their own countries. They subconsciously tend to recreate the mode of life despite the desire to leave their own countries and societies with their rules…

Since the victory of Bolshevist Revolution in 1917 the all following parties and movements from the countries of so-called “Third World”, including first of all Muslim extremists and former Communists from former post-Soviet countries that try to find the weakly motivated parts of population in Western countries in order to wage the subversive activity despite the deep civilizational insolvency of these social systems from which they arrived. These social systems are based on the system of state regulation of economy and defects of opportunities for private personal initiative.

A lot of technological discoveries that construct the content of new technological revolution inevitably tend to displace the “superfluous” working class toward the margin of public life. The changes and challenges of technological and scientific upheaval in the Western society generate the broad masses of the discontented population among the working class, especially among “non-college” part of population. We earlier said that the quantity of monotonous jobs gradually reduces in the advanced countries.

In these conditions the leaders of post-Soviet and Muslim worlds try to bribe the influential leaders of the Western society as agents of influence or “useful idiots” or “political cans”. We have various definitions of agents of influence for Eastern tyrannies. The activity of these influential leaders can rely on the already available moods of this above-mentioned part of population. The pessimistic sentiments will be fueled by the conservative inertia of the public moods and representations of less skilled and less educated broad masses of people that cannot at once change their mode of life and professions.

The inability to adapt to the sudden challenges pushes these personalities to impute the guilt to their own Western state power or cursed businessmen. The Western society undoubtedly in closest future will have a lot of weak social layers or separate personalities that need in protection more than in the freedom for the creative activity. The repeated elections in Georgia with defeats of Saakashvili show us the stubborn unwillingness of Georgian population to find new opportunities in this changing life. Of course, we mean the typical post-Soviet country as former Soviet republic. Nevertheless, we can show the case with the weak part of classic Western country, where the population also seeks to be under protection of state power.

The authors of project “Winning the Information War” Edward Lucas and Peter Pomerantsev emphasize the necessity to counter the Russian propaganda and must prevent the dilution and the decay of the Western society. First of all, the major efforts must be directed namely for the indigenous inhabitants of Western countries where exist the current difficulties of the escalation technological development with the facts of substitution or displacement of backward jobs.

The Western society must mitigate the aftermath of this deep technological revolution by means of enlargement and optimization of upbringing and education since the earliest age. This main goal can will be possible by means of active development of self-consciousness of democratic mode of life. The democracy as such is a target of ardent assaults of backward countries and societies from the “Third World” and the weak fragments of the same Western society. Socialists, communists, far-right and far-left wings of political movements potentially can be allies of the fanatic ideologists from the religious or totalitarian part of the “Third World”.

The self-consciousness of the democratic society ought to spot and mend all weak parts of the Western society that could be the target of the totalitarian attacks from dishonest ideologists and politicians from the indigenous Western population. If the migrants or the persons from the same Western society are unable to initiate the creative projects they inevitably tend to acquire the ways proper to the regime of physical survival.

They try to reach the tops of the state power in order to reach the wealth at the cost of the men and women with the rules of normal creative activity that can exist only in the atmosphere of the true freedom. The former immigrants try to be elected in the public political institutions of the Western state power. Thus, these persons in considerable quantity at once can reach the commanding heights of the Western state power in order to inculcate the rules of life proper to the backward countries of the “Third World”. This process of conquest follows gradually and invisibly such as in late centuries of the Roman Empire.

Now the Western World, it seems, can be doomed to repeat the history of the great ancient empire. In similar conditions we can observe the similar consequences.

The Romans in time couldn’t see the dangerous threats of this so-called “cultural dialogue”. In each moment the situation seems calm and safe. But the hidden changes in the composition of population tend to make these changes irreversible. We know well now who is a Mayor of London. The bright picture of the composition of population in Moscow where the indigenous Russians is a minority in their own capital.

In these circumstances the self-consciousness of European community must take care of the safeguard of the cultural identity with its intellectual very important achievements. The cultural consequences of the escalation of migrations directly rise from the great technological revolution in the Western World.

The necessity of the cultural adaptation of migrants and the weak parts of the Western population is a condition of the survival of European, Western civilization. We should comprehend that the main threats we face not from the military immediate intervention but by means of the conscious assault of the leaders of the backward “Third World” with their attempts to dilute and destroy the Western society with its habits of personal freedom as a prerequisite of the true creative activity.