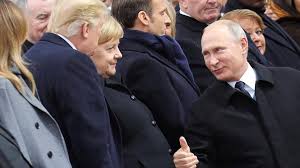 The situation in Ukraine is rather paradoxical when we see a discrepancy between the bright obvious picture of events and the inner meaning of these same events, which reveal a completely different meaning of these events. For example, the head of a revolution can lead a counter-revolution, secretly sympathizing with the natural enemies of a develoed world — Western politicians such as President Trump envy Eastern dictators with their unlimited state power and their ability to achieve enormous wealth using the levers of state power and unconditional support from oppressed peoples.

In these strange and striking conditions, we see a successful attack by leaders of lagging countries on the state centers of Western civilization with such powerful industry, science, respectively, including the armed forces with the latest weapons.

Of course, we understand that the main force not only in the armed forces, in government, but also in people, especially in their motivation to win, protects the core values ​​of Western civilization as a whole.

We see a weakening of personal motivation to support, protect certain Western values ​​and life goals, which we can observe after the collapse of communism, so we need to be reminded of the danger, the dangers of post-communist political regimes hanging over the borders of the Western world, which is only one-eighth of humanity.

Of course, the leaders of the lagging post-communist countries cannot invade western countries and defeat their armed forces, cannot compete economically, they cannot offer any cultural or intellectual products from their lagging countries that could draw sympathy to their cultural or economic achievements. . Moreover, they are not able to instill fear in front of the mighty forces of the absolute dictators of the lagging world.

In general, they are weak to inspire fear through military force, they cannot evoke sympathy, they cannot be convinced of their attractiveness. But the leaders of the postcommunist world are eager to directly influence the situation in Western countries, especially the ruling circles, and to attract the vain hopes of employees who sometimes face employers and state power. These subversive centers of Putin’s Russia are trying to undermine the foundations of the Western liberal economy and the democratic state institutions of the main Western countries, using the means of communication and transport invented in the same West.

These hostile centers of the Russian (in fact – post-communist) empire are trying to use the hidden methods of the typical intelligence service (KGB, GRU, after – FSB) to overthrow the basic basis of Western society as such. For this, they use the methods of spy special operations.

In this context, we must ask ourselves: why? Why do these post-communist leaders have powerful motives for using subversive operations? Is it possible to assume that this international Russian political and ideological activity was dictated solely by Putin’s personal features? Or should we assume that this abnormally astounding activity of the Kremlin was dictated by the nature of the former communism and the character of the Russian Empire? Can we say that Putin, as a rule, expresses the fundamental interests of preserving the Russian empire as the real last empire in the world. Should we foresee that this feverish activity stems from the deep fear of the post-communist leaders of the inevitable death of the post-communist regimes as the true heirs of the communist regime that was not overthrown on time.

Of course, the post-communist regimes in the countries of the former Soviet Union are mostly fruitless and leave behind scorched earth under feet. For their survival, they must conquer NEW countries, especially Western ones, in order to gain vital resources in order to continue their eternal existence. But we remind that they cannot subdue Western countries, they cannot even intimidate Western societies in order to subjugate European societies. As a result, they are forced to undermine the foundations of democratic institutions and the confidence of their people in these state and public institutions. In other words, they are trying to destroy Western society from the inside and attract the weaker sections of the Western population, using temporary difficulties related to the circumstances of the fourth technological revolution and general automation in the most developed countries. The internal difficulties of Western countries give rise to a mood of uncertainty, hopelessness, even despair. At this historical moment, we are witnessing a revival of the left political and ideological movement. The Kremlin regime is trying to use the extreme right-wing and extreme left-wing political movements for the sake of the intervention of Russian influence in Western countries. This is the main prerequisite for his political survival as destructive state regimes, within which we must see the human anti-world. Leaders of the lagging world for the sake of survival will never abandon hostile activities against the West, especially against the United States and Israel.